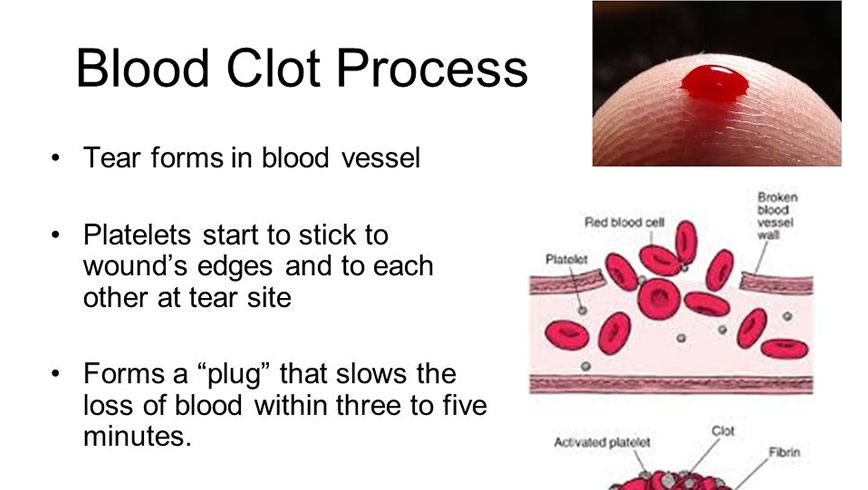 WHAT IS THE PROCESS OF BLOOD CLOTTING

Blood clotting is also referred to as blood coagulation. Blood clotting is the process by which elements of the blood combine to form a thick gel-like substance that prevents one from excessive bleeding. The platelets and the protein in the plasma play a key role in aiding the coagulation of blood. Hemostasis is the body’s way of stopping bleeding on injured vessels; it includes blood clotting or coagulation.

When one is injured his/her vessels constrict to avoid the excessive flow of blood; the platelets then cover the injured part of the body to, and they spread along the injured blood vessel to cause clotting. The platelets bind specific membrane receptors on the endothelium; they are mediated by the Von Willebrand Factor which links the platelets to the collagen fibrils.

The chemicals produced by the tiny sacs inside the platelets attract other cells in the blood and clump together to form a platelet plug. This plug helps to prevent infections causing bacteria from accessing the injured part.

Thrombin converts fibrinogen, which is a clotting factor dissolved in the blood, to form strands that are known as fibrins that act as a trap for the platelets and other blood cells, making the clot durable and long-lasting. There are proteins in the blood that assist in making the clot grow into the desired size without it overgrowing, covering unwanted areas. Fibrin also play the role of keeping the injured blood vessel plugged in place.

When the tissue begins the healing process, the fibrin strands dissolves, and the blood absorbs back the platelets and the blood cells that were in the clot. The clotting may spread to other unnecessary parts of the body causing other effects if not stopped. Clotting can block other unaffected vessels if not stopped; disrupting the flow of blood in the body.

However, as much as blood coagulation saves lives, it can also take one’s life, especially with blood clots in the brain. Drugs such as aspirin, clopidogrel, dipyridamole, and ticlopidine are drugs that stop the platelet from forming clots.

The body’s ability to clot is important but too much clotting can cause heart attacks, pulmonary embolism, and strokes. Drugs can also affect the ability of one’s blood to clot. One's clotting can affect the menstrual cycle of women, and thus they are urged to take anticoagulants.

If one's blood does not clot one is one is at risk of bleeding to death; the bleeding can occur internally or externally. Internal bleedings that do not clot are dangerous as they can cause slow deaths that are hardly noticeable. One is asked to take foods rich in iron to aide in their blood coagulation. Hemophilia which affects 1 in every 10000 people is a blood clotting disorder. However, the most common blood coagulation disorder is the Von Willebrand Disease (VWD) which is also hereditary and not easily noticeable as most people experience mild bleedings. People with inherited blood clotting disorders often have random bruises that they don’t know how they occurred and frequent bleedings.