For ASPEN simulations of the phenol production process, we will use a zeolite catalyst. The material dissociates into ion during the process and hence dissolves. The EPNRTL property method was employed in the implementation of the simulation throughout the report.

The zeolite catalyst used was not well defined. Hence, there was the need to make meaningful assumptions. This is because the solubility of the catalyst will influence the separation section of the process i.e. can result in clogging of the pipe and the distillation column trays. From the IUPAC analysis, most of the catalysts parts were soluble.

Assumptions had to be made in regards with the solvent required for the process. From the analysis of water, acetone and the benzene mixtures in the reactor, it was necessary to maintain the miscible single-phase solution at 22 psi. 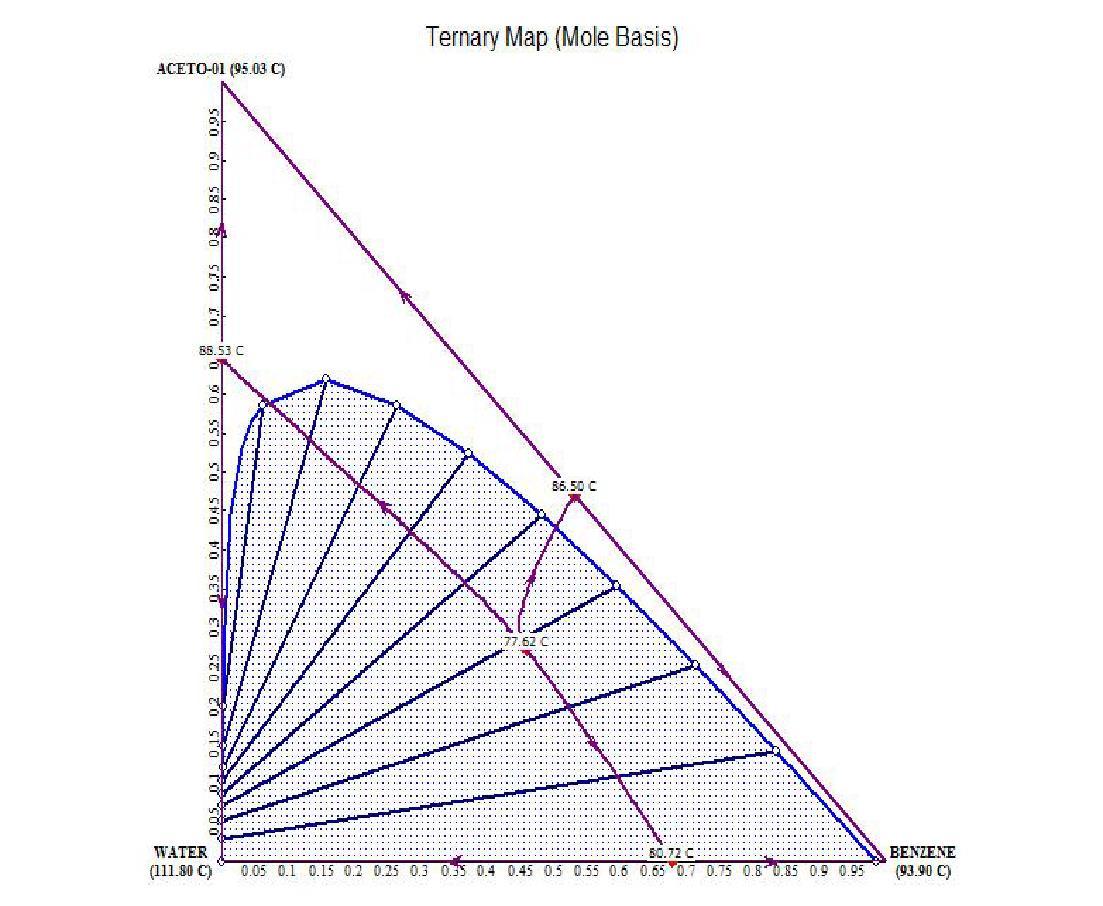 The project will assume that waste treatment already does exist or will be included due to the nature of the chemical processes carried out.

Simulation in ASPEN plus

The reactor is where the primary process of propylene and benzene react hence has to be modeled as specified in the components list. The alkylation and trans-alkylation reactors are modeled separately. A temperature range of 300-400 oC and pressure of 25 atm are adopted.

Using the equilibrium condition pressure is not considered as the reaction occurs at equilibrium pressure but is dependent on temperature and the benzene/propylene ratio. ASPEN Plus has seven reactor models available.

The calculations made are based on the following formula

Impact of temperature and benzene/propylene concentration on the reaction. 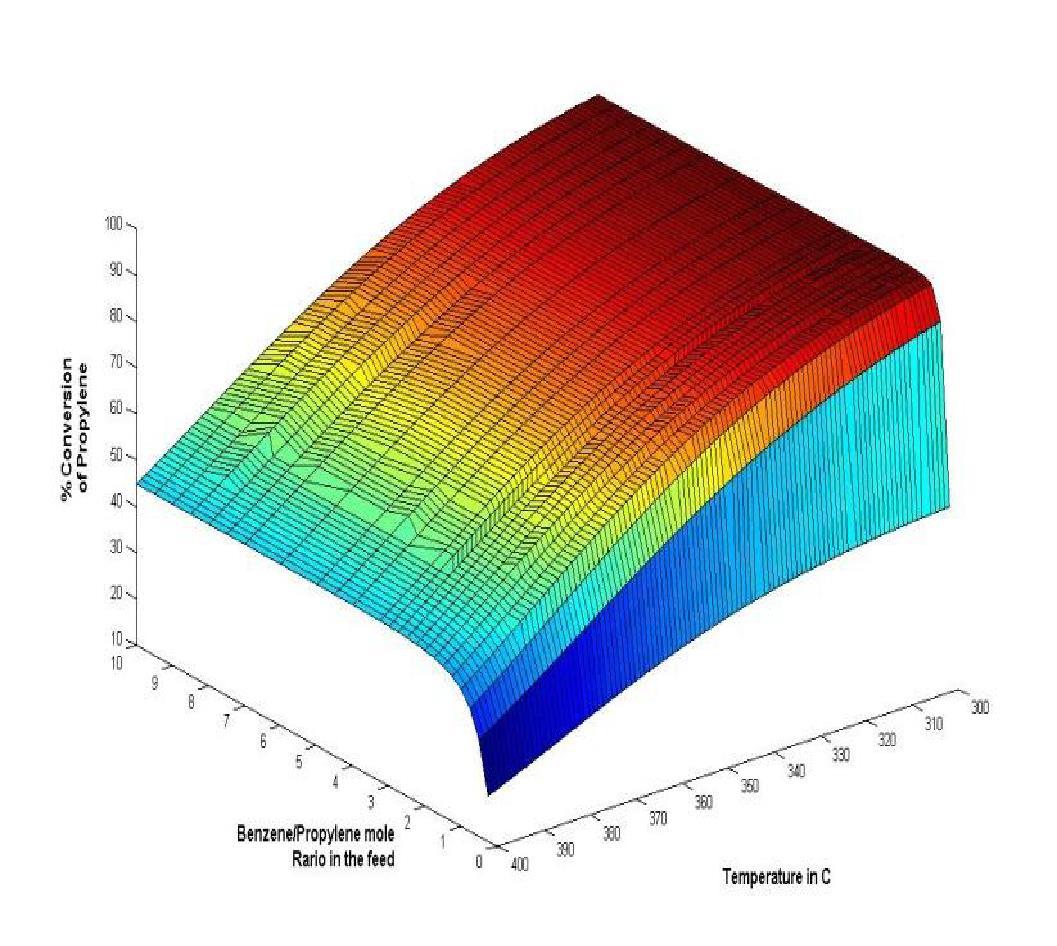 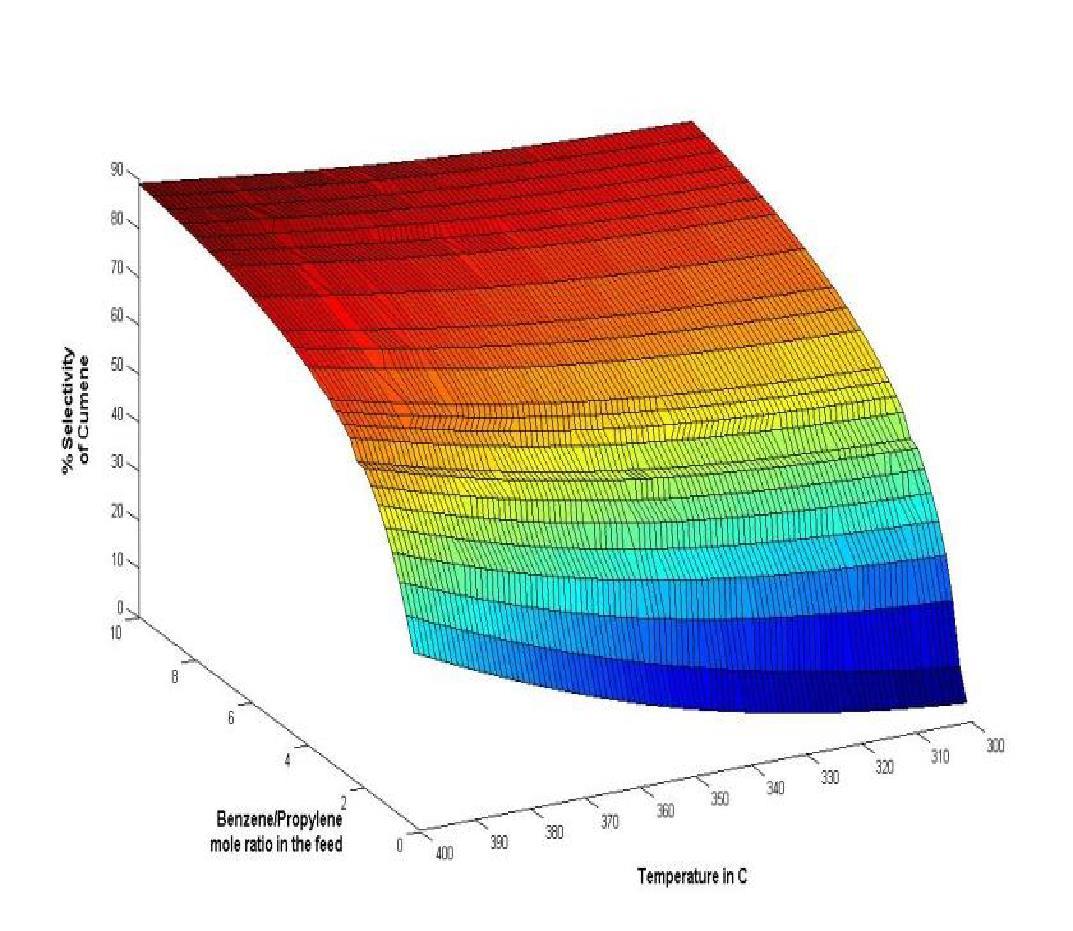 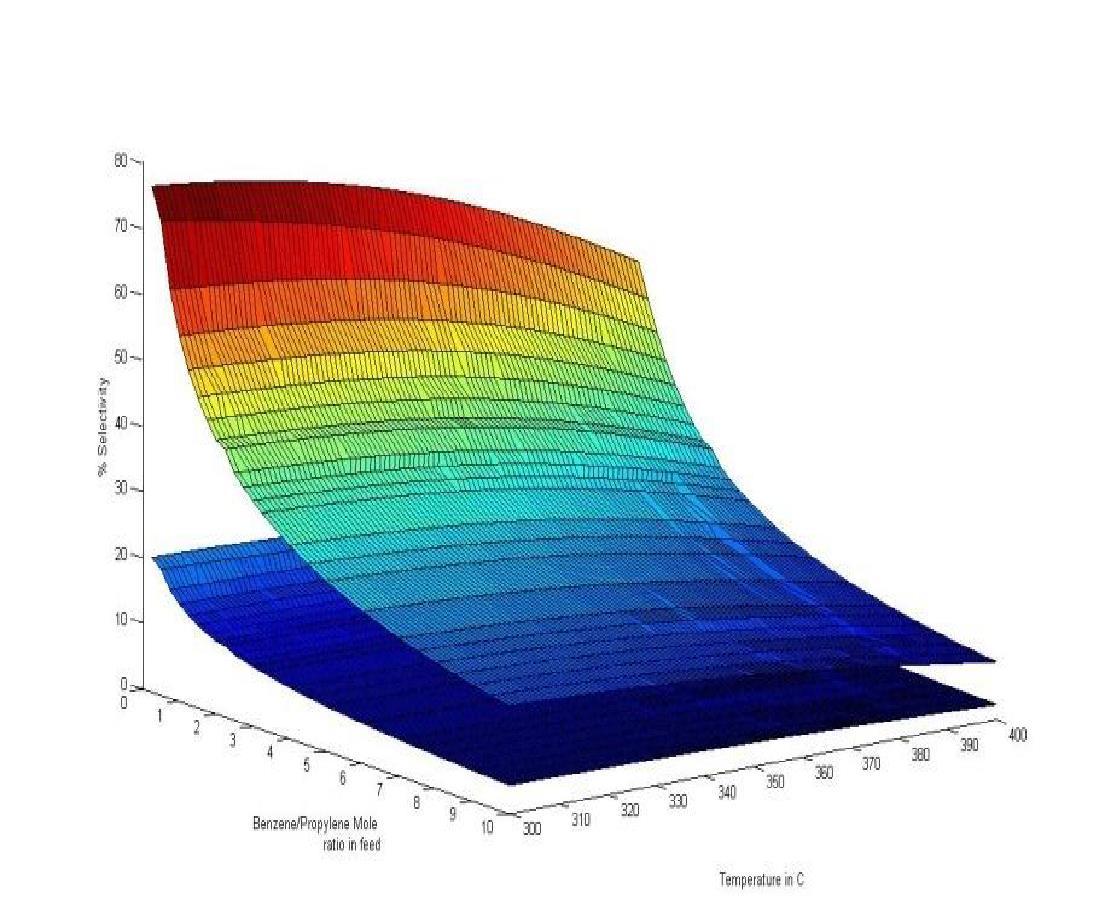 This process of phenol production involves purified or recycled cumene being oxidized. Cumene is fed in a stream into the oxidation vessel which is maintained at 110-115 oC and pH range of 6.0 to 8.0. This mixture is maintained exposed to compressed air until at least 20-25% of the cumene is converted to cumene hydroperoxide

This crude mixture is concentrated to 80% then injected to a reactor where the Cumene hydroperoxide is cleavage to phenol and acetone at around 70 oC and the atmospheric pressure. The reaction requires a small amount of Sulphuric acid so as to take place.

The stream is then directed to the separation process, but first, it is washed in water, and the acetone is removed as the overhead in the first column. The mixture is then purified by successive distillation. In the first column, the unreacted Cumene is transferred to the recycle stream. This cumene is treated before sending it back to the feed stream.

The purification process is through catalytic hydrogenation of Methyl Styrene to cumene; this achieved through careful fractionation where methyl styrene is obtained as a by-product.

The reaction of phenol was in two steps. The first reaction is the production of Cumene hydroperoxide by two raw materials i.e. cumene and oxygen. The reaction takes place in the oxidizing tower at 110-115 oC and pH range of 6.0 to 8.0. The intermediate product which is cumene hydroperoxide is used as a reactant in the second reactor, the reactor intended to be used is the Continuous Stirred Tank Reactor (CSTR). Most of the conversion occurs here i.e. about 90%. In the separation process, the side product and waste are removed to get the primary product i.e. Phenol.

Figure 5: Block diagram for the process of Phenol 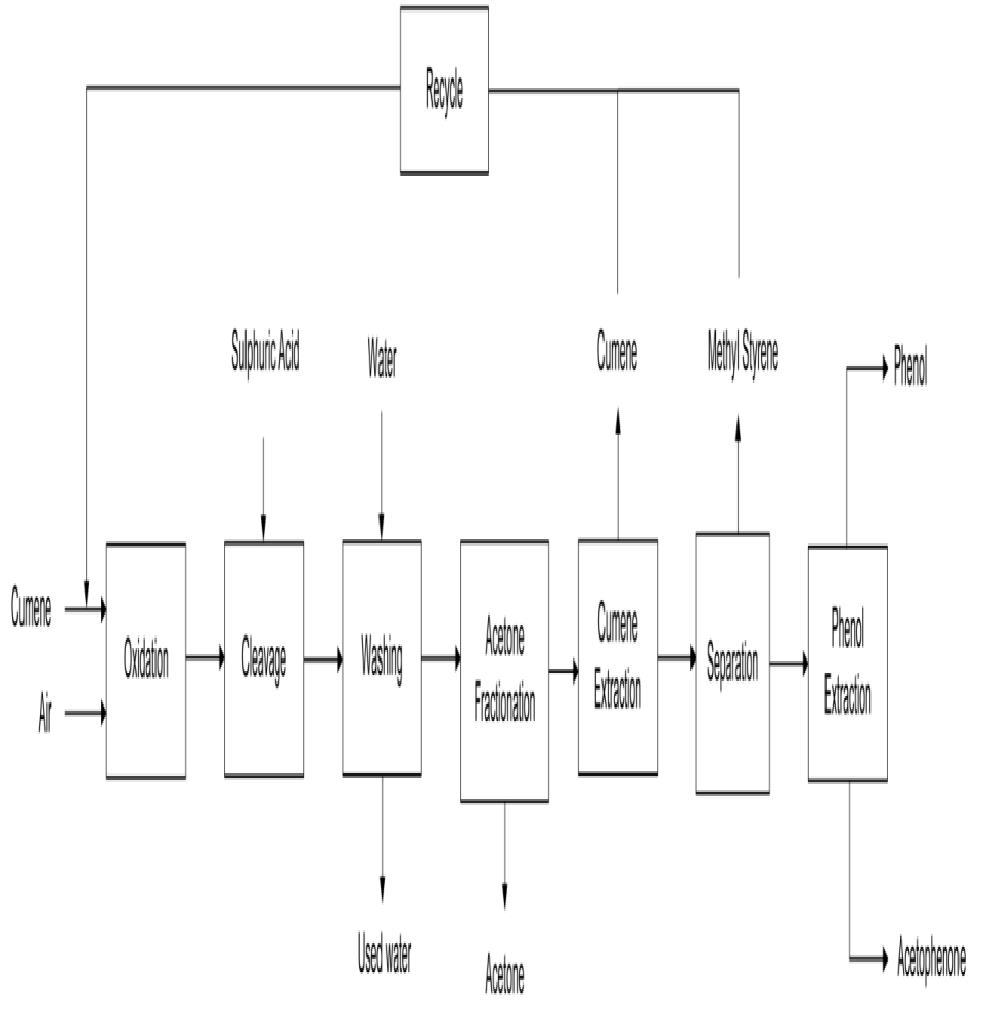 So as to do a simulation the phenol production process is composed of two processes i.e. oxidation and cleavage of Cumene

Table of distillate at various stages 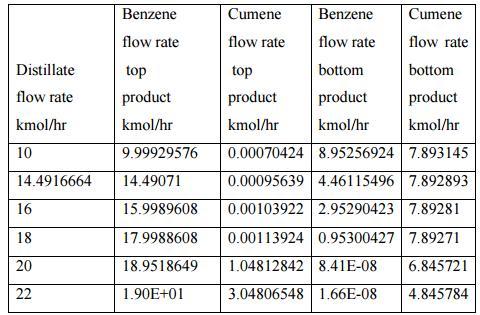 From the diagram the process has six steps 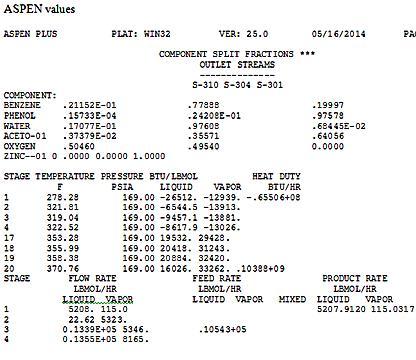 To increase the pressure of benzene feed to 3000 kPa

To increase the pressure of propylene feed to 3000 kPa

Vaporizes and superheats the mixture of the feed to 350 oC

Where the conversion of the limiting reactants take place.

The combination of the heat exchanger and a flash drum. Aimed at lowering the temperature and pressure to separate inert propane and unreacted propylene from the Cumene and benzene.

Hand calculation of reactants in the reactor.

The values obtained indicate that reactor 2 would require 73722.26 kg/h of the Cumene hydro peroxide and Cumene and oxygen to produce 15566.63kg/h of phenol at the conversion rate of 90%.

To fully perform the material and energy balance in the system (hysys) there is a need to draw the conversion chambers and their respective input and output streams.

Comparison of the ASPEN plus results and the hand calculation results 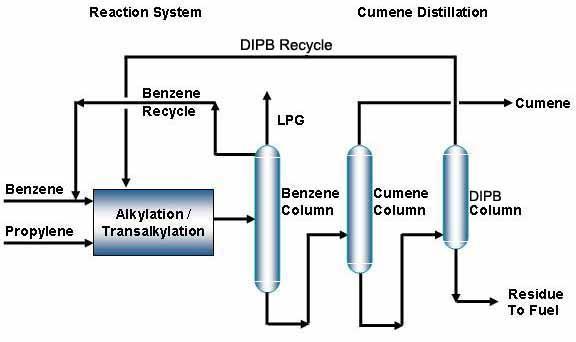 From the data provide in the ASPEN plus report we can conclude that the hand calculation give a clear indication of the substance to be used. The simulation provides an ideal condition of the project.

The primary goal of the design process is to analyze the cost and the fundamentals of production of 100000 metric tons of carbolic acid annually. From the chemical books, the molecular weight of Cumene is 120.20 g mol-1 and it has density of 862 kg/m3. While Benzene has a density of 876 kg/m3 and molecular weight of 78.11 g/mol. Finally Propylene possess a density of 1.81kg/m3 and a molecular weight of 42.08g/mol. Conclusively Phenol has a density of 1070kg/m3 while its molar mass is 94.11g/mol [9]. Putting these densities and molar masses in mind, the following input requirements are going to be made necessary: 255050 metric tons of Cumene, 728545 tonnes of propylene and 392490 tonnes of benzene to fabricate. These values are estimated to the closest five metric tons.

In evaluating the alternatives, we do the profitability analysis based on the numbers of economic criteria i.e. payback period, cash flow analysis and internal rate of return. We apply the equivalent annual operating cost in the analysis

When the value of EAOC is negative, it indicates profitability. The cost of Cumene nad benzene was obtained from chemical marketing reporter. Capital cost annuity (an annual cost) is a one-time fixed cost that majorly entail the construction of the plant. It is defined as

FCI is the installed cost of all equipment;

n is the plant life for accounting purposes, n = 10.

For industrial application, the plan can be approximated to consume $ 25 million in fixed costs plus $ 127.6 million/year in direct capital expenditure [7]. The static costs will be accrued through the purchase of equipment such as; boilers, a pre-heater, a reactor, a heater, coolers, refluxes, a compressor, condensers, columns and condacuums [7]. Most of the direct capital costs will result from the purchase of raw materials. Which can be projected to cost of $1.37, $1.12, $1.20 and $3.30 per kg respectively for Cumene, propylene, benzene, and DIPB the basic materials are predicted to cause an annual expenditure of $ 133419932 $ 45552468, $ 79919133, and $12521737 in verbatim as tabulated below.

The need for safety management is rendered necessary by the presence of flammable and toxic materials. The process should consider control of process quality and deviations within the processes.

This chemical is very hazardous when inhaled. It is also irritant to both skin and eyes. When spilled to a great amount it should be prevented from coming into contact with heat or an ignition source. Protection gear should be worn like splash goggles, lab coats, and gloves. It is also considered to be carcinogenic.

It has a skin and eye irritation effect. It is also corrosive to skin and eye in case of contact. It can also cause tissue and respiratory tract damage. Can cause combustion and provide oxygen to sustain fires. Personal protection equipment i.e. gloves, face shield, boots, vapor respirator and full suit should be worn.

It is hazardous in case of contact or inhalation. It is irritating both to the skin and the eye. Exposure can also lead to lung, kidney, and central nervous system damage. Personal protection should include a synthetic apron, vapor, splash goggles, gloves and dust respirators.

Benzene has a flammability limit of 1.2 percent to 11.5 percent by volume in oxygen. Benzene being present in effluent vapor requires control mechanism to avoid fires. A controlled natural gas feed into the

The process of phenol production is exothermic hence there is provision for a cooling system. Interruption in the cooling system increases the temperature of the reactors. This changes in temperature can result into a runaway reaction that can ultimately rapture the vessels. The noted points of interest are the cooling water line, the monomer feed line, reactor vessel and the stirring motor. From the Hazop analysis we can get the following modifications:

The Hazop report can be presented as: 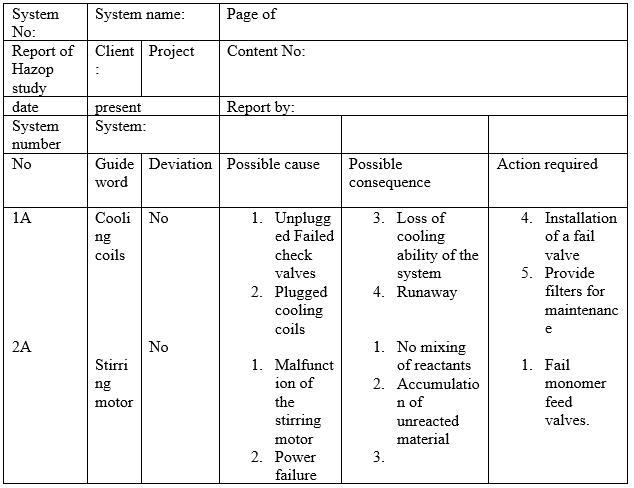 Several production elements must be considered to make the plant environmentally friendly. Flare should be included to prevent organic compounds being released into the air. Any resulting gas effluents are combined, purified and passed through the flare for filtering of organic compounds. Methane is included as a controlled feed to reduce the flammability of the system.

These wastes are generated at the various stages of the process and have different impacts on the environment. Acetophenone is a major by-product of the whole system.

Acidified water is released from the processes that occur in the separation chamber. This waste is generated when the PH of water is lowered and due deposited through precipitation. The water disrupts the ecosystem and significant nutrient flow leading to the death of freshwater fish and plant that depend on PH conditions.

Properties of the acidified water include:

From these environmental conditions, it is evident that the plant requires much water for the recycling process hence would be advisable that is located near a water source. This location is also supported by the fact that transport to international market will be made easy by waterways. effluent is used to ensure fuel-rich operation and enable flaring.

The ground layout of the factory 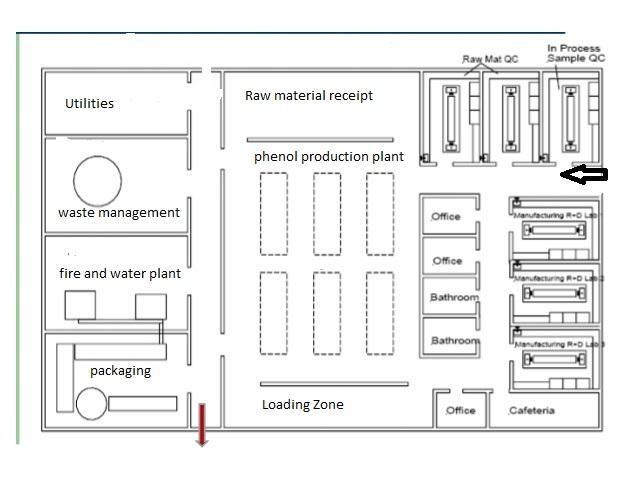 The layout is designed that way so as to allow for the entrance of material and leaving off the product in a convenient way. The factory is situated at the center of the layout to make it accessible from all the parts of the campus.

[2] c. hail, "FT-NIR analysis of the Hock Process for the production of phenol and acetone," Thermo fisher scientific inc, madison, 2008.

Plus” National Institute of Technology Rourkela 2010